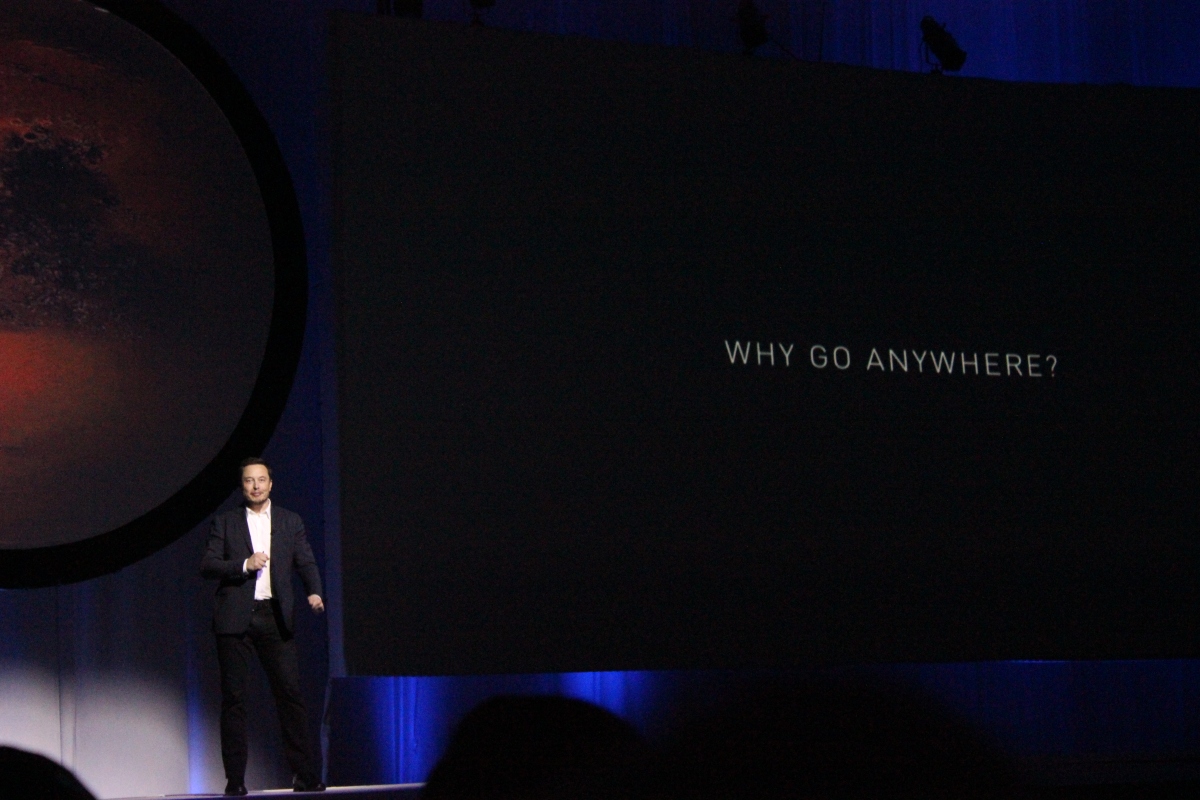 I didn’t travel 17 hours from Denmark to Guadalajara (Mexico) to drink tequila and lie on the beach. Instead, I had traversed the 9,600 kilometers (5,900 miles) to spend five days in a congress-center with an air-conditioning system that was a bit too cold for my regular outfit of jeans and a t-shirt. This should have come as no surprise to me; the International Astronautical Congress is an annual event that attracts mainly gray-haired men from aerospace companies and universities around the world who wear black business suits and ties. During the 5-day long event these men are busy swapping business cards, giving presentations and holding meetings – all of which demands an indoor climate substantially cooler than the Mexican outdoors.

I hadn’t brought any business cards; my purpose was to witness the Elon Musks keynote on making humans a multiplanetary species.

The first thing I noticed when walking in through the big glass entrance was the emphasis on Mars. Lockheed Martin – main sponsor of IAC 2016 – featured a video outlining the “Mars Base Camp” concept at their exhibition. According to this, astronauts will go into orbit around The Red Planet in a space station assembled in Lunar orbit, thus paving the way for human footprints on the red, rusty surface sometime in the 2030’s. Also, the company had put these stickers on the congress floor: 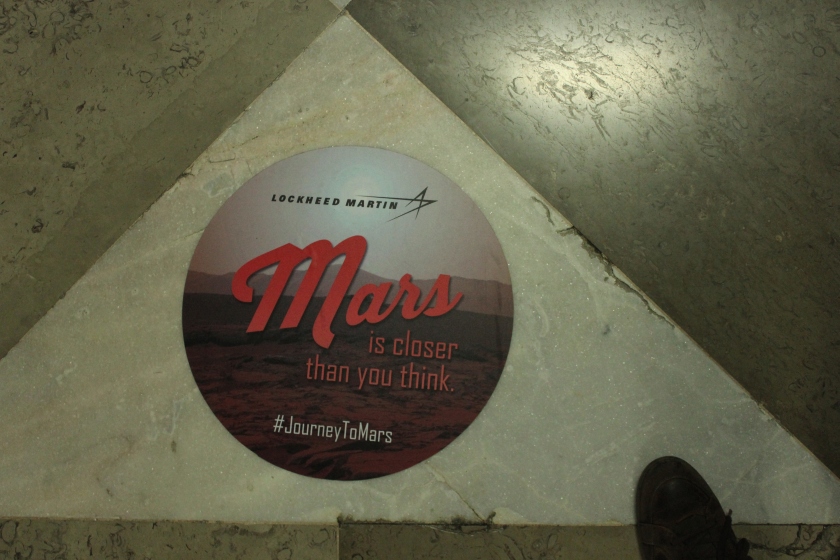 Sunday before the congress actually got started, I attended my first series of lectures. Buzz Aldrin, the second person to walk on the Moon, gave a lecture on how to send multiple spaceships to The Red Planet, by having them in constant orbit between the Earth and the Moon and the Moon and Mars. Before him, a person from the Chinese Space Agency outlined the future for their space program, which includes an orbiter and a lander mission to Mars in the beginning of the 2020’s.

On the day of the official opening the Director General of ESA, Jan Wörner, said; “Everybody wants to go to Mars”. He, however, advocates for going back to the Moon first and establish a base on the lunar South Pole. A concrete roadmap for this plan remains to be seen, and Wörner calls the “Moon Village” a concept, rather than a strategy already being developed. Currently ESA is building the service module for NASA’s Orion capsule – an essential piece of hardware for NASA’s “Journey to Mars”.

So the talk about going to our red neighbor planet started just as the congress opened its doors to the 4,000 delegates attending. But the talk was still to come.

Early morning – the 27th of September – delegates gathered in front of the shut doors guarding the main plenary hall. By each passing hour the crowd grew larger. Elon Musks speech wasn’t even due before 14.30. When the doors opened people ran to get a good seat and even the VIPs crammed the entrance. Excited as everybody else around me to see Elons plan I sat down in the fourth row. The lights dimmed and a circular screen turned into the planet Mars. Elon Musk got on stage, illuminated by bright spotlights. He gave his talk. 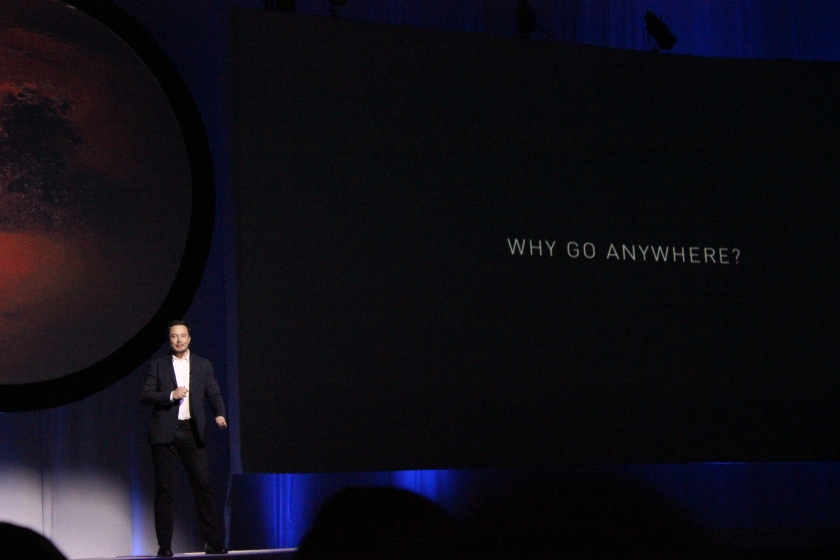 I won’t bother you with the details of his speech. The sort of people reading a blog entry like this probably already know the specific impulse of the Raptor engine and the crew capacity of the Interplanetary Transport System. Anyway, if you don’t know the details, watch Elons speech here.

Every conversation after the presentation echoed Musks vision. Each person I talked to had a slightly different reaction to it; Some complained about the silly Q&A, some lamented the lack of details and yet others were dumbstruck with amazement and couldn’t wait to buy a ticket to Mars.

I was so fortunate as to sit next to Robert Zubrin the following day, who is the founder of the Mars Society and author of the book The Case for Mars. We were chatting and he invited me to sit in on an interview he was doing with Joe Mascaro, a blogger for Now Space. 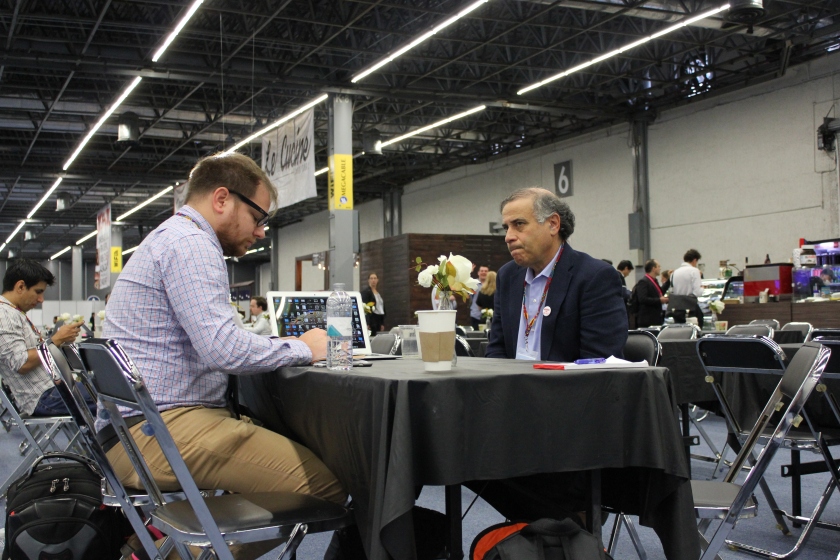 Joe wrote an excellent article on the conversation that you should definitely read (click here!). Also, listen to this podcast where Zubrin is interviewed about the Interplanetary Transport System.

In summary, Robert Zubrin has some serious concerns regarding the Interplanetary Transport System. According to him, the spacecraft is overkill; sending humans to Mars does not require a vessel with 150 tons of dry mass and a speedy travel time of down to 80 days.

“People who are going to spend the rest of their lives on Mars don’t care if the trip takes three or six months,” Zubrin said. By using a slower travel time than the one proposed by Musk and by relying on smaller spacecraft, a more effective system could be devised.

Although Zubrin views the Interplanetary Transport System as a “suboptimal design” he holds Elon Musk in high regard.

“Do you think he [Elon, red] is an explorer?” asked Joe Mascaro. Zubrin paused for around a minute.

“Elon is a hero,” he then said. According to Zubrin, the South African entrepreneur has definitely rocked the aerospace industry and now everybody wants to go to Mars.

Other concerns besides the design were raised at the congress. Bill Nye from the Planetary Society had also attended the presentation and he praises the vision but doubts people will choose to live under the harsh conditions of Mars. Also, he warns that colonists could wipe out evidence of past or present life on The Red Planet, by spreading microbes from Earth that would be difficult to distinguish from possible Martian life. 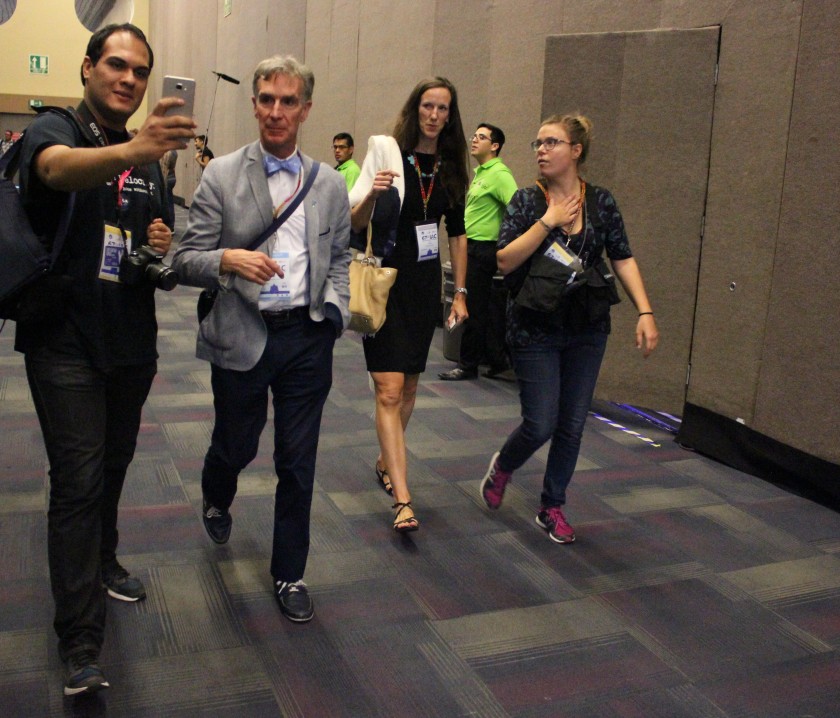 After a presentation on the scientific results of New Horizons, I talked to a NASA official who liked Elons idea, though, he and many others regard funding as the biggest challenge for SpaceX to overcome. Elon Musk suggested jokingly in his presentation “Stealing underpants” and “Kickstarter” as possible sources of funding.

The money-problem might be the real reason for him to present his plan at IAC. The Interplanetary Transport System is essentially an empty space-train, where private and state actors in partnership can decide what goes to Mars. Elons speech was therefore primarily addressed to the many representatives from aerospace companies and space agencies sitting in the dim congress-hall, rather than to SpaceX fans from Denmark or Mexicans girls wanting to give Elon a kiss. In a press conference after the presentation, Musk stated that as of now, only five percent of the SpaceX workforce is working on the Interplanetary Transport System. In the future more effort will be put into the project.

Jeff Foust from SpaceNews wrote a good piece on this, which you can read by clicking here.

It took me some days to digest what the Interplanetary Transport System actually is. The thought of the giant spaceship and the even bigger booster was like a splinter in my mind. Something about it seemed unreal (besides the fact that it has not yet been constructed). Then it hit me; this isn’t a spacecraft. At least, it’s not useful to think of the Interplanetary Transport System as a vehicle in the same category as the Saturn V or the Vostok 1. Those rockets were like the Wright Flyer (the airplane that the Wright brothers constructed) – essentially experimental vehicles that proved successful and carried astronauts into space but with no direct commercial value. The Interplanetary Transport System on the other hand is a modern day passenger plane. Like a Boeing 747 it gives consumers the possibility of buying a seat on a ride from A to B – only this ride takes you to another planet. It needs to have commercial value from the start. Otherwise it won’t work.

From an aesthetical point of view, the Saturn V has always been the prototypical spacecraft in my mind. Towards the top it got pointier and pointier and it ended, like the graphite at the end of a sharpened pencil, with the launch escape tower at the tip of the rocket. Pictures of fiery stage separations come to mind when thinking of the Saturn V; each separation dooming a giant fuel tank to its graveyard on the bottom of the ocean.

The Interplanetary Transport System is an entirely different creature in comparison. When I first saw it, I thought; “SpaceX has really managed to outdo themselves in their efforts to make rockets look even more phallic”. Make a model of the rocket that could fit in your hand and I bet most people would mistake it for a sex toy.

This vehicle has no launch escape tower, nor does it have stages in the conventional sense of the term. Instead it consists of a booster and a spacecraft. The spacecraft alone takes up 40 percent of the entire length of the vessel. Compare that to the length of the Saturn V third stage, which only took up about one sixth (16.6%) the length of the entire rocket. Elon Musk seems to have trashed conventional wisdom within rocket science that says; “Big rockets carry small paylods” and replacing it with his own insight; “Giant rockets carry big spacecraft”.

Much like modern airplanes don’t need to be biplane or be made of wood, the Interplanetary Transport System is not expendable and does not come with a launch abort system. At the press conference after his speech, I asked Elon about the abort capabilities of the vessel. He said that “the spaceship can fly away from the booster if there’s a problem at the booster level” but added;

“Launch abort on the spaceship itself is kind of pointless. If you’re on Mars you’re taking off or you’re not taking off. The key is to make the spaceship itself extremely safe and reliable, and have redundancy in the engines, high safety margins and have it be well tested. Much like a commercial airline; they don’t give you parachutes.”

I filmed only the bit after I had asked the question and you can watch the clip here. Also, you can find the full transcript of the press conference by clicking here.

It will be exciting to follow the development of the Interplanetary Transport System. Humans travelling to Mars will be the adventure of our lifetime. However, one question that I still have, has to do with the versatility of the spacecraft. Musk only hit upon this very briefly at the end of the presentation, where he imagined the vessel landing on Saturns moon Enceladus or going into orbit around Jupiter. But I think there are lower hanging fruits than the outer planets. How about using the Interplanetary Transport System as a cruise ship in LEO or even in Cis-Lunar space? I can imagine a lot more people wanting to go on a short trip into space, rather than spending the rest of their lives on Mars. Personally, that seems much more appealing to me. Using the spacecraft as a cruise ship could thus be part of creating the necessary funding for the Mars-colony and serve as a testing ground at the same time.

Also, I view this as a great opportunity for scientific missions. Normally, scientific space missions consist of a probe and a team of scientists. With the Interplanetary Transport System you could ditch the probe and send the scientists directly to the object of investigation. Like Darwin travelled the Earth in search of scientific discoveries, scientists of the future may visit the worlds of the Solar System and uncover great secrets.

I had, and still have, a feeling that IAC 2016 and Elon Musks speech will end up in the history books. Certainly, if he actually succeeds with his endeavour, the future scholars on Mars will point to Guadalajara as the place where it all started. I’m very happy to have been part of that.